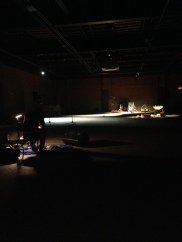 RAFT (Pat Nocker)
MOBILE SPACE IMPROVISED
Using his iPhone as his primary recording, sampling and performance device, RAFT (Pat Noecker) will build an improvised composition that explores the voice of Eyebeam’s Main Space.
Many of his aesthetic choices will focus on lower frequencies and utilize the 21″ sub woofer to consume the space with large wave forms, which he envisions as way to reveal the voice of the space.
Noecker will sample the furnace, blowers, doors and many other sounds derived from surfaces and the audience at Eyebeam. To incorporate source material from the audience, he will ask them to walk around the space and record brief samples with their phones. After the audience sends their samples via text, Noecker will add these voice notes to his composition. His exploration of audience-sourced material and the act of listening as performance will lead him to a new exploration of the voice of spaces.

P. Spadine
SOLO FOR PERCUSSION AND 3 TAPES
In this piece, Spadine will play a percussion solo within an acoustic environment while three tape recorders capture the performance. The tapes will be switched between players to cause pitch and timing variations. They will then be rewound, manipulated, and played back through three discreet loudspeakers.

Pedro Sousa
A SONG FOR TRUE: PERFORMANCE FOR PLURAL LARYNX
Inspired by Jerry True, an American saxophonist who used an air compressor to play the saxophone after losing his voice box to throat cancer, this composition will use the saxophone as an unusual medium for the creation of drone music, exploring the microtonal, reflective and acoustic properties and differences of these woodwind instruments.

RAFT (Pat Noecker)
As RAFT, Noecker creates music out of apps and communication technologies, primarily the cell phone. He uses the cell phone as a medium, turning it into a communal device through his collaborative cosmic experiments involving audience-sourced media through text messages, voicemails and voice notes.
After spending years collaborating in musical projects such as Liars, These Are Powers, and the Bubu Gang, RAFT has emerged as Noecker’s primary voice.
His groups have performed in numerous cultural venues including MoMA, The Whitney, PS1, The Kennedy Center, The Getty Museum, London ICA, and The San Francisco Fillmore. Noecker has received critical acclaim from numerous publications such as Rolling Stone, The New Yorker, New York Magazine, Spin, Time-Out, the New York Times and more. Noecker is also the creator of ASSEMBLE, a series of improvisational collaborative round robins, featuring artists such as Bob Boilen (NPR’s All Songs Considered), Jerry Busher (Fugazi) and Taraka Larson (Prince Rama).
:
P. SPADINE
Brooklyn based composer/tinkerer/builder P. Spadine exercises his wonder for the physics that bind the universe by creating the intertwined aural and visual aspects of his work under the umbrella moniker “Ashcan Orchestra.” By employing children’s handbells, balloons, homemade circuitry, household electronics, and other peculiar instruments, he can be found, with the help of his friends, bringing his menagerie to life at a basement/gallery/venue near you.
:
PEDRO SOUSA
Pedro Sousa is a sculptor turned musician, his work mainly centered around kinetic and sound sculptures. He is currently working around the music scene in Lisbon, and is developing work on the side result of his studies Ar.Co and the Fine-Arts Faculty of Lisbon.
He takes part in a project named Oto, an all electronics trio whose debut concert was in the established Serralves Institute. Sousa is also part of a duo with the drummer Gabriel Ferrandini, a member of eitr (a duo project with saxophone and turntablist Pedro Lopes), a member of ACRE (an improvised music Trio with rooted on rock with Gabriel Ferrandini and Felipe Felizardo), and plays as a duo with Hernani Faustino. He has participated several times in the Variable Geometry Orchestra (VGO for short), directed by Ernesto Rodrigues from the Creative Sources Label, and the now defunct Flu, an improvised rock/noise band. He has attended several festivals and is a frequent collaborator in the improvised/jazz scene in Lisbon, collaborating occasionally as a reviewer for the Jazz.pt magazine and as an illustrator for Clean Feed. In 2010 he won an honorary mention in the Intermedia grant “Bolsa Ernesto de Sousa” curated by Phil Niblock with the performance/installation: “Your Round Smell”.
http://shhpuma.com/pedro-sousa/